Red pillers and the manosphere

This is your last chance. After this there is no turning back. You take the blue pill: the story ends, you wake up in your bed and believe whatever you want to believe. You take the red pill: you stay in Wonderland and I show you how deep the rabbit hole goes. Morpheus, The Matrix

In the Wachowski brothers’ 1999 film, The Matrix, the main character Neo has to choose between a red pill and a blue pill. By taking the blue pill he would remain in the matrix, living in a pretend world. The red pill, on the other hand, would allow him to escape this fantasy world and join reality, however hard it may be. This idea,  that some people are able to see reality, while the rest are living in a make-believe world is also explored in Plato’s Allegory of the Cave. However, in the wrong hands it can be dangerous, and is the staple of many an outlandish conspiracy theory.

The idea came to mind as I listened to a podcast of the BBC Radio 4 programme Out of  the Ordinary that took a look at fringe groups. A couple of weeks ago they examined the manosphere, a loose network of sites on the internet that focus on men’s issues. Many in this movement actually call themselves red pillers, the enlightened men who realize that it is men, not women, who are oppressed. Yes, they argue it’s true that men do occupy the commanding heights of power, but the vast majority of men don’t enjoy this power. If you take away the higher levels, women actually have it better. Women have large and powerful support groups, while men don’t. some of the concerns are rather prosaic.  A woman can get the man to pay for drinks or a meal. Men hold the doors open. Other parts of the men’s rights’ litany are more profound. Women are charged less and receive less severe sentences in court . Ultimately more men commit suicide.

These blogs, forums and websites can be seen as a reaction to feminism, or, if you prefer, a vile outpouring of misogyny. It is a disparate movement. There are some common ideas, especially that feminism is their enemy and that this pernicious ideology has upturned natural biological differences. What is needed is for men to return to their traditional uber-masculine gender role. They are strongly opposed to male circumcision; protests have involved men in boiler suits with fake blood, actually red acrylic paint, symbolizing “the damage and trauma from genital cutting. They put it on a par with female circumcision, which would seem to me to be a gross exaggeration. 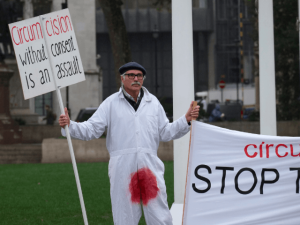 In Out of the Ordinary one speaker who seemed to be claiming that there is a cot death conspiracy. SIDS, Sudden infant death syndrome, is more prevalent in males, with a consistent 50% male excess in SIDS per 1000 live births of each sex. And finally one website had this claim:

Who is in the manosphere? You have pick-up artists, PUAs, who, according to Wikipedia is “a movement of men whose goal is seduction and sexual success with/access to women”. This pseudoscience might appear cheesy and offensive, but it can also be downright sinister. This is the case of Daryush Valizadeh, AKA Roosh V, a blogger of Iranian and Armenian extraction. Roosh is behind Bang Guides, a collection of series of country-specific pickup guides, such as Bang Iceland, in which he writes:

” While walking to my place, I realized how drunk she was. In America, having sex with her would have been rape, since she couldn’t legally give her consent. It didn’t help matters that I was relatively sober, but I can’t say I cared or even hesitated.”

This is more like a guide for date rape – Roosh does not see the word no as something that stops him. And in one blog post, “How to Stop Rape“, he went even further, proposing the legalisation of rape if it takes place on private property:

“If rape becomes legal under my proposal, a girl will protect her body in the same manner that she protects her purse and smartphone. If rape becomes legal, a girl will not enter an impaired state of mind where she can’t resist being dragged off to a bedroom with a man who she is unsure of—she’ll scream, yell, or kick at his attempt while bystanders are still around. If rape becomes legal, she will never be unchaperoned with a man she doesn’t want to sleep with. After several months of advertising this law throughout the land, rape would be virtually eliminated on the first day it is applied.”

On being confronted by BBC presenter Reggie Yates, Roosh said that the post was meant as satire, a tactic straight from the Donald Trump playbook.

Roosh lives in the States, but the men’s rights movement has also gained a toehold in the UK. In the mid-2000s Fathers 4 Justice, British paternal rights group achieved notoriety with their stunts, which often involved scaling public monuments dressed as superheroes. But these days the organisation that has come to the fore is Men Going Their Own Way, which is shortened to MGTOW (pronounced migtow) Their idea seems to be that men should disengage from women completely. Feminists typically say that the personal is political. This also seems to apply to miggies, as members of the organisation are sometimes known, who seem to have suffered traumatic experiences with women. The sceptical website, RationalWiki, says that they claim to be victims of:

Here is a video from one prominent miggie:

After investigating this unfamiliar world I do feel like a shower. I was aware of the hatred that exists against women. In a post about trolling I mentioned how Caroline Criado-Perez had been threatened with rape for suggesting that Jane Austen be put on the Bank Of England £10 note. But, I must admit I wasn’t aware of organisations like MGTOW. I suppose it isn’t surprising, and there is some overlap with alt-right movement, which I mentioned a few weeks ago. I can see that there is a crisis of masculinity, confusion about new gender rules. And I certainly disagree with feminism about a number of issues. Nevertheless, it is a reminder that social progress, unlike scientific progress, is not linear. We can, indeed, go backwards. And in the manosphere we have a small but dedicated group of men who want to just that.

This entry was posted on Sunday, December 4th, 2016 at 9:18 am and is filed under Articles, Politics & Society. You can follow any responses to this entry through the RSS 2.0 feed. You can leave a response, or trackback from your own site.

This site uses Akismet to reduce spam. Learn how your comment data is processed.